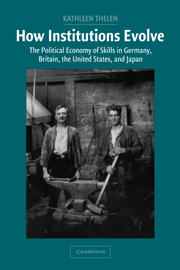 The Political Economy Skills in Germany, Britain, the United States and Japan

The institutional arrangements governing skill formation are widely seen as constituting a key element in the institutional constellations that define 'varieties of capitalism' across the developed democracies. This book explores the origins and evolution of such institutions in four countries - Germany, Britain, the United States and Japan. It traces cross-national differences in contemporary training regimes back to the nineteenth century, and specifically to the character of the political settlement achieved among employers in skill-intensive industries, artisans, and early trade unions. The book also tracks evolution and change in training institutions over a century of development. It uncovers important continuities through putative 'break points' in history but also – more importantly perhaps—it provides insights into modes of institutional change that are incremental but cumulatively transformative. The study underscores the limits of the most prominent approaches to institutional change, and it identifies the political processes through which the form and functions of institutions can be radically reconfigured over time.