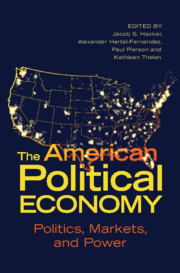 This volume brings together leading political scientists to explore the distinctive features of the American political economy. The introductory chapter provides a comparatively informed framework for analyzing the interplay of markets and politics in the United States, focusing on three key factors: uniquely fragmented and decentralized political institutions; an interest group landscape characterized by weak labor organizations and powerful, parochial business groups; and an entrenched legacy of ethno-racial divisions embedded in both government and markets. Subsequent chapters look at the fundamental dynamics that result, including the place of the courts in multi-venue politics, the political economy of labor, sectional conflict within and across cities and regions, the consolidation of financial markets and corporate monopoly and monopsony power, and the ongoing rise of the knowledge economy. Together, the chapters provide a revealing new map of the politics of democratic capitalism in the United States.